The Misconception of Heat Absorption and Metal Roofing

We recently received a comment on one of our blog posts, and the writer was quite adamant that the metal roof installed on his parents' home has made the house unbearably hot. He concluded that installing the metal roof was a regrettable decision. Even though the writer was not a customer of ours, made the comment anonymously, and left no information about the type or metal roof his folks had installed (or any other details of the job, for that matter), I felt it worth responding just because there are plenty of misconceptions about metal roofing. Heat absorption is one of them. 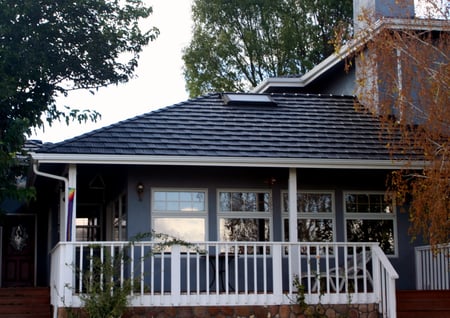 Understanding Heat Absorption into a Home

It’s practically impossible for a properly constructed home to be significantly impacted by the type of roof covering installed. It’s true that some types of roofs can conduct more or less heat into an attic or roof deck at certain times of the day, but there are so many other factors besides the roof covering that it’s almost meaningless point fingers at any one.

Here are just a few questions that need to be answered to pin down the source of this home's excessive heat:

Even in the hottest parts of the summer, a roof's solar gain (the heat absorbed from the sun’s rays) occurs most significantly on buildings that lack any shade for a maximum or eight or nine hours a day. That means that for nearly two thirds of the time, the roof is the same temperature as the surrounding air. All roofs get to roughly the same temperature (peaking at maybe 130-150F) when directly absorbing sunlight, but the lighter and less dense the material, the faster it cools to ambient air temperatures. Metal roofs are the lightest materials, and by their nature, they hold on to heat the least when compared to heavier, denser roof materials like asphalt, concrete, or slate. There’s a reason that you can touch aluminum foil just a few seconds after you removed it from a hot oven, while touching anything else from the oven at the same time will cause third degree burns!

Rather than being a source of increased heat into a house or other building, metal roofs are touted by many experts as a good roof covering for hot climates because they can significantly contribute to a reduction of heat accumulation by building envelopes.

While I'm sure the post author has his mind made up, there's need to take my word for it (even though we sell may Energy Star rated Cool Roof systems. There are plenty of other ways of finding out about these great properties of metal roofing systems. Check out some of these links or search “Metal Roofs and Hot Climates”, and find out for yourself what building professionals already know:

You can also visit our Resources page to download guides comparing metal roofing to other popular roof materials.