Getting Ahead of a Big Roof Problem

Years and years of supplying material to the roofing industry had long driven home the point that the vast majority of folk rarely think about the very, very prominent architectural element of their home that is the primary weatherproofing surface: i.e. their roof! 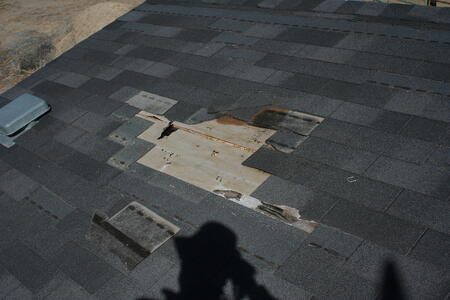 There is one rather common exception to this building owner’s rule of behavior, and it’s usually triggered by something bad - either the discovery of parts of the roof on lawn (never a good thing), or spots on the ceiling (even worse ), or drips into the bedroom (very, very bad!). Because even the cheapest of roofs and the worst of roof installations can usually last a few years, it’s not surprising that folks just get used to their roof doing its job and think nothing of it until the day something unexpected occurs.

It’s the occurrence of these shocking discoveries that invariably prompt owners to action. Unfortunately, often by the time they’re reporting a leak in the roof, the damage has gone beyond the roof itself and water in places it shouldn’t be has begun to create other damage. Wooden decking and framing, insulation, sheet rock, interior finishes, flooring and electrical fixtures are all damaged by water leaks and if the water leak is persistent and long-term, the damage to these components of your home can be very extensive - and expensive! I have seen leaks that were allowed to continue long enough to literally cultivate mushroom growth in a spare bedroom closet.

What is the responsible and forward thinking building owner to do to assure that he doesn’t neglect this major portion of his building’s exterior to the point that it becomes a far-reaching problem? Here’s my advice:

If you have ANY reason to suspect your roof is showing evidence of loose, missing, or damaged pieces,

OR you can see new and unexpected brown or black spots on any part of the interior ceiling,

OR you find water leaking down through any ceiling or wall,

OR your neighbors with similar roofs in type and age to yours are having their roofs repaired and/or replaced,

OR your roof is more than 15 years old,

THEN you should PAY a professional roofer (one who has been in business AT LEAST ten years in your immediate area) to climb up on the roof and offer his opinion of its condition. I highly recommend you pay for this opinion (maybe $50 to $100 for most homes and small buildings) instead of accepingt a “free” evaluation, for the very fact that paying for the opinion at least removes SOME of the self-interest that a roofer may have in coloring the report he provides.

If he says that your roof is in good shape, then great. If he suggests it’s not, then have him show you pictures of the portions of your roof that concern him. From there, you can decide if the time and money are available to repair or replace your roof BEFORE its neglect begins to take a toll on the rest of your structure.